For developing nations aiming to increase food exports, establishing controlled food safety systems is becoming increasingly vital. One of the most interesting case examples can be seen in the poultry industry in Colombia.

When it comes to the country’s contribution to the world’s diet, most minds go directly to coffee. Yet Colombian poultry production has exponentially grown in recent decades as the country’s economy and trade activity have boomed just as other regions have sought more availability and diversity of protein sources.

Last year, the Journal of Food Protection published a research paper – “Microbiological Profile of three Commercial Poultry Processing Plants in Colombia” – that bears review. Knowing how crucial it is for export-minded nations to create and comply with food safety standards that mesh with international rules and bring credible microbiological baselines into that discussion, Alejandra Ramirez-Hernandez and her colleagues at Texas Tech University took on the dirty job of scrutinizing hundreds of chicken carcass rinses and scores of chicken fecal samples to determine the prevalence of Salmonella and E. coli.

Their 3M technology-aided research concluded that Salmonella prevalence was on par with the reference percentages found from their Latin American neighbors and was more or less consistent from one test site to the next. E. coli levels, on the other hand, varied more considerably amongst the various processing locations studied.

In contemplating this data and its meaning, five takeaways strike me as important or intriguing:

1. There’s no mistaking USDA’s global reach – Over the past 25 years, the U.S. Department of Agriculture’s Food Safety and Inspection Service (FSIS) has more than once revised its testing program and modified its sampling approach for Salmonella and Campylobacter affecting poultry production. The changes are far-reaching, affecting foreign suppliers as well as domestic producers.

Taking its cues from USDA, foreign governments modify their regulatory systems and require their food supply system to comply. Colombia is a perfect example. It has much on the line after growing its agricultural trade with the U.S. by more than 80 percent from 2000 to 2010. Hence, its local FDA-equivalent published a decree requiring production facilities to improve sanitary conditions for poultry processing operations and inspection and implement HACCP food safety management systems. Additionally, the country’s National Federation of Poultry Farmers began incentivizing implementation of HACCP programs in slaughter poultry establishments as a voluntary measure to improve food safety, aid secure inspection and facilitate poultry exchange between the U.S. and Colombia.

2. More of the world is realizing that microbiological benchmarks are important – Professional baseball players know that a .300 batting average is considered high-performance and can compare themselves with that statistic. Most people gauge their health by understanding that a blood pressure level that’s more than 120 over 80 and less than 140 over 90 is considered healthy.

Similarly, the Colombian agricultural community is realizing it needs data on its baselines and how it continues to fare in light of foreign partners’ demands. The USDA’s latest Salmonella standards require contamination rates of no more than 25 percent in ground chicken, nearly twice as stringent as the previous standard. How does Colombia stack up?

While Colombia’s infrastructure for sanitation and inspection has advanced, it should be noted that official microbial performance standards for compliance are not included in the country’s decree. Also, no official microbial baseline data source yet exists to give poultry processors a reference to measure in-plant effectiveness. In this era of “big data,” industry, government, and academia are all realizing – hence, the basis for this research – baseline data is sorely needed for processors to measure their in-plant SOP effectiveness versus national and international reference sources.

3. Foreign farms are now under the microscope – If birds of a feather flock together, the microorganisms in those birds congregate too. Processors in developing nations have advanced their sophistication in maintaining clean conditions that thwart in-plant contamination, but this research reminds that it’s also important to account for the hatcheries and broilers where the chickens are raised in the first place. This is critical in poultry, where livestock is kept in tight quarters, increasing the probability of contamination from excrement to spread from one bird to another or into food and water sources.

The statistically significant variance in E. coli prevalence observed in the fecal samples from the cages of boiler chickens reinforces the importance of primary production sample testing/monitoring. Farms, slaughterhouses must be on their game, maintaining environments ready to pass inspection.

4. Beware of “to bleach their own” philosophies – The researchers imply that observed discrepancies in pathogenic prevalence may be most influenced by how various processors chemically treat their poultry and the processing water it comes into contact with at the chilling phase prior to products being packaged and shipped for consumption. In their own words, “chlorine pH and concentration and the quality of the incoming water can affect the antimicrobial efficacy of chlorine on chicken carcasses, and therefore could explain the variable results obtained in these processing plants.”

The takeaway here is, if using chlorine as a kill step, you must be especially certain it’s effective. Some parts of the world regulate the amount of bleach that can be used, while other nations are more silent on this topic. If manufacturers choose to make bleach in-house, they must ensure it’s mixed at a proper concentration and follow the chemical manufacturers’ recommendations. Consumers everywhere are counting on them.

5. Today’s processors can diagnose deep and wide – Reviewing Ramirez-Hernandez and team’s research brings to mind that processors in developing countries – and anywhere else – are wise to examine their products’ microbial composition multiple ways at multiple times. From a HACCP perspective, manufacturers can routinely analyze the microbial load of their samples as an indication of how effective their interventions are and how likely a sample may contain serious pathogens. Internationally validated molecular-based pathogen detection methods (e.g. the 3M™ Molecular Detection System) can provide highly specific and sensitive detection to accelerate processors’ analyses and give more information and confidence in their food safety management systems.

Fortunately for the Colombian poultry world and other foreign food processors looking to increase the exportation, cost-effective solutions exist to take this “deep+wide” food safety approach and spread their wings to new geographies.

Need more information on the total 3M Food Safety testing solution? Simply reach out and we’ll be happy to help you with any questions you have. Contact a rep here. 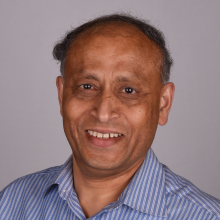 Senior Global Technical Service, Food Safety Lab Raj Rajagopal has been working in 3M for the last 20 years in various groups and functions. Prior to 3M he worked in several academic institutions (University of Iowa, University of Georgia and University of Minnesota) in microbial physiology, molecular biology, anaerobic microbiology and genetics. He has a Masters and Ph.D. in Microbiology from India and MBA from University of Minnesota. In 3M, he started out in Biomaterials Technology Center and then in Biotechnologies Project. He was involved in antimicrobials development (FAME), microfluidic card for real time PCR and 3M cycler development. Later, he worked in 3M Pharmaceuticals doing genomics and proteomics research for couple years. He then moved to Safety and graphics group lab (formerly SS&PS lab) exploring food safety and hospital hygiene platform for Commercial Solutions Division and was instrumental in launching hospital hygiene platform. Recently, he worked on developing rapid bacterial testing (E. coli and coliform) for potable water quality. In addition, he also explored opportunity in water-energy nexus and identified several opportunities for 3M to pursue further. He joined Food Safety Department in June 2016 and has been supporting pathogen detection platform. Raj has 25 issued patents and 30 plus publications in peer reviewed journals.

3M takes your privacy seriously. 3M and its authorized third parties will use the information you provided in accordance with our Privacy Policy to send you communications for Transforming Outcomes, a 3M Medical blog. Please be aware that this information may be stored on a server located in the U.S. If you do not consent to this use of your personal information, please do not use this system.